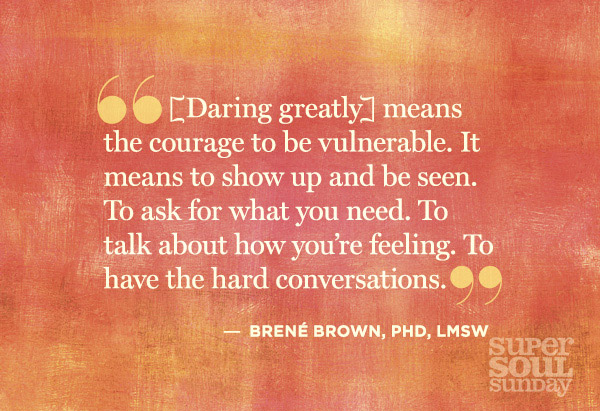 By Friday I had turned into a zombie. I wasn’t physically exhausted. Besides having tender tootsies from wearing heels my body was fine (must be all that running and eating healthy I’ve been doing). No, I was emotionally frozen. I wasn’t sad, or angry or happy. I was shell-shocked. I didn’t remember a word I said on stage, and I was pretty sure I didn’t cover everything I had in my notes. All I could hope was that some of it made sense to someone. A few people came up to me later and said that my message really resonated for them, and that I was telling their story. My numb brain was wondering if they were just being nice. I could, however, clearly remember what I said on camera to the local news. THAT was the paralyzing agent. THAT was vulnerability.

The beautiful and bubbly Leeann Cusak asked me on camera how Oprah had the biggest impact on my life. I answered truthfully with a fact I have written about before, that it was an Oprah Show episode that facilitated a conversation with my mother about child abuse I endured by my step-father and prompted her to call the police that day. That Oprah show changed my life forever. But by Friday I learned that it is one thing to bury that sort of information in a book or blog post and a completely different kind of vulnerability to say it out loud under the glare of the lights with a television camera in your face.  I wanted to go back and take it all back.

Why did I want to take it back? It is the truth. It is part of my story. Why did sharing my story have me second guessing my choice to talk about it? Was I worried what people would think of me? No. I have always been very open about my past on purpose. I worked hard on ridding myself of the idea I had something to be ashamed of and I try to model that for other women who have abuse histories too. In fact, I was contacted by someone that night who had been abused as a child, and she thanked me for showing her how strong we can become once we work through the trauma of our pasts.

I think my regret was more about the when and the where of the sharing, and I think my regret has more to do with social constructs. This was an event that I had been very excited about—happy happy joy joy. The room was filled with bright pinks and sequins, the music was upbeat and the organizers’ smiles exuded positivity. But I was sharing a message that is typically shared in hushed tones, or talked about with empathetic nods and the passing of tissues to sop up tears. I was breaking the code of conduct by holding my head up high, and stating facts without shame or drama. I was also inserting the darker realities of life into a rainbows and butterflies moment. That was what I regretted during my vulnerability hang-over. I wasn’t the cool, funny, miss-Mary-sunshine person in the crowd. I was real.

So, was it wrong of me to have shared my story during that day? According to our current social constructs, maybe yes, though no one called me out on it. This has really all played out in my head. But I think it is more than about time that we take the layer of shame and grime off child abuse and let survival of it and thriving after it share the stage with happiness and joy. The fact that it took me three days of soul searching to come to this realization is one of the symptoms of a problem that will not go away overnight. But relentless chants of women can be heard everywhere lately, calling for change around victim blaming and rape culture. It’s time we all accept some vulnerability hang-overs for the sake of humanity, for the sake of facing the truth, for the sake of being real.